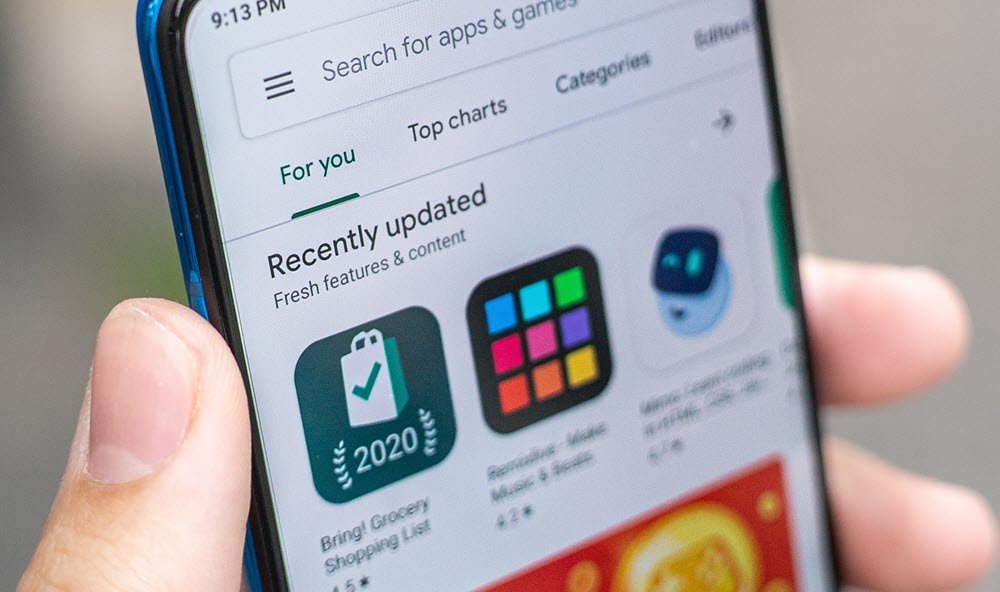 Fix problems with the Play Store on Android


Play Market is one of the key pieces of Google's operating system, since through it users find and install new games and apps and update them. In some cases, this important component of the operating system stops working properly, refusing to perform its main function: download and / or update applications. In today's article we will tell you how to fix these problems.

Why is Google Play Market not working?

Almost any failure of the App Store is usually accompanied by a notification window, in which an error number is specified. The problem is that this code designation says absolutely nothing to the average user. However, do not get upset: a solution has long been found, or rather its various variants.

In a special section of our site, you can find detailed troubleshooting guides for most of the numbered (code-named) errors on the Play Market. Follow the link below and find the specific material for your problem there. If you cannot find the error that you encountered (for example, it is not associated with the same error number or does not appear at all), try the methods described in this article. For most of them, we will refer you to the instructions we already have.

No matter how serious the problem is with the Android system or its individual components, it can sometimes be solved with a trivial reboot of the device. Perhaps this or that Play Market error is just a temporary and isolated failure, and you only have to reboot the system to restore its operation. Do so, and then try using the Store again to install or update the software that previously caused the error.

Read more: How to restart your Android device

If restarting didn't help, Market may not work for some other trivial reason, such as lack or poor internet quality. Check if the data or Wi-Fi is activated on your device and the stability of your connection to the Internet. If necessary, and if possible, connect to another access point (for wireless networks) or find an area with a more stable cellular coverage.

The last thing to do before proceeding directly to troubleshooting the Store is to check the date and time on your device. If at least one of these settings is misconfigured, it is very likely that the operating system will not be able to contact Google's servers.

If the basic recommendations described above did not help to resolve the existing problem, proceed with the suggested steps below in succession.

Final report: After performing each of the steps in the following methods, we recommend that you first restart your mobile phone or tablet, and only then use the Play Store, checking if the problems in its operation have disappeared.

After checking and configuring the obvious little things correctly, you can safely proceed directly to the Play Market, which is where you see the problems. Despite being an integral part of the operating system, it is essentially the same application as the others. During a long run, the Store is covered in file garbage, unnecessary data and cache, which must be removed. Such a simple action is one of the necessary steps (and often the only one) to eliminate numerical errors.

Restart your device and then try using the App Store. If after deleting the data and the functionality of the cache is not restored, you must ensure that you update to the latest updated version. In most cases, updates come and install automatically, but can sometimes be disabled.

Interestingly, the opposite, that is, the update, can also be the cause of the Play Store inoperative. On rare occasions, updates are installed incorrectly or simply contain bugs and glitches. And if the problems in the work of the Google application store are caused by the latest update, it is necessary to reverse it. We have already written about how to do it.

Google Play Services is another important component of the Android operating system. It ensures the correct functioning of Google's proprietary apps, including the long-suffering Play Store. Like the latter, Services also "stalls" over time, accumulating unnecessary data and cache, making it difficult to function. All this must be erased in the same way as in the case of the App Store, and then restart the mobile phone or tablet. We have already discussed the algorithm for this simple procedure.

Like Play Market and other applications, Google Services are also updated regularly. The problem discussed in this article may have been caused by an incorrectly installed update, or by the absence of an update on your operating system. Uninstall service updates, restart your device and wait for the application to update automatically or do it manually. Our articles will help you perform this procedure.

Google Services Framework is another proprietary application that, like the aforementioned system component, can affect the Play Market. It should be treated in a similar way: first, clear the accumulated data and cache over time, then roll back the updates, reboot and wait for them to install automatically. It is done in the same way as with all other applications, including the ones mentioned above. The only difference is that you have to select Google Services Framework from the list of installed applications.

A Google account on your Android mobile phone provides access to all the brand's applications and services, as well as allowing you to synchronize and save important information in the cloud. For this, the operating system has a separate application, Google Accounts. Due to certain reasons, often independent of the user, this important component of the operating system can be disabled. To restore the operation of the Play Store, you will need to activate it again.

After starting the operating system, try using the Play Store.

"Boot manager"built into the operating system, similar to deactivated Google accounts, may be one of the reasons why the App Store refuses to work. As in the previous method, you have to check if this OS component is activated and, at the same time, clear its cache. This is done in the same way as described in the previous method, the only difference is the name of the application you are looking for.

In method 4, we have already written about the importance of the Google account in the operating system, and it is not surprising that this link, or rather the problems with it, can negatively affect the work of other components as well. If none of the solutions we have suggested above has been successful in restoring the functionality of Play Market, you must remove the main Google account from your mobile device and link it again. In one of the thematic articles we wrote about how to do it.

It is important: To carry out these steps, you need to know not only your account username, but also your password. Be careful not to make a mistake when entering it.

More information: How to delete and re-link a Google account

The options described above will be useless if a virus has been installed within the operating system. Yes, Android is much less prone to infection than Windows, but it still happens sometimes. The algorithm of actions in such an unpleasant situation is not very different from what we all used to do on the computer: the operating system needs to be scanned with an antivirus, and in case of malware detection not only remove it, but also clean the files of unnecessary entries. We've already written about all of this before in our Play Market reviews and articles.

It is extremely rare, but it still happens that none of the methods expressed within this article can fix the problems in the Play Store. In such an unpleasant situation, it will be impossible to update applications and games, or download new ones, that is, the mobile device will lose most of its functionality.

If there are other problems in the operation of Android, it is recommended to reboot it. However, it should be understood that this procedure involves the complete removal of user data and files, installed applications, and everything that was originally missing from the device. Before performing this procedure, we highly recommend making a backup.

The methods we have suggested can fix any Play Store malfunction. The option described above is only recommended to be used when there are other problems, errors and / or glitches in the operation of your Android-based mobile device. If you don't want to find the root cause of why Play Market is not working and fix it, you can simply install one of the alternative app stores and use it.

As you can see, there are quite a few reasons why the Play Store on Android may not work. Fortunately, for each of them there is a different elimination option, even more like a step in the fight against the problem. The methods proposed by us within this material should be performed in order, since the first half of them - the most frequent and simple, the second - special cases and one-time failures, which you can encounter very rarely. We hope this article has helped you get your mobile app store up and running.